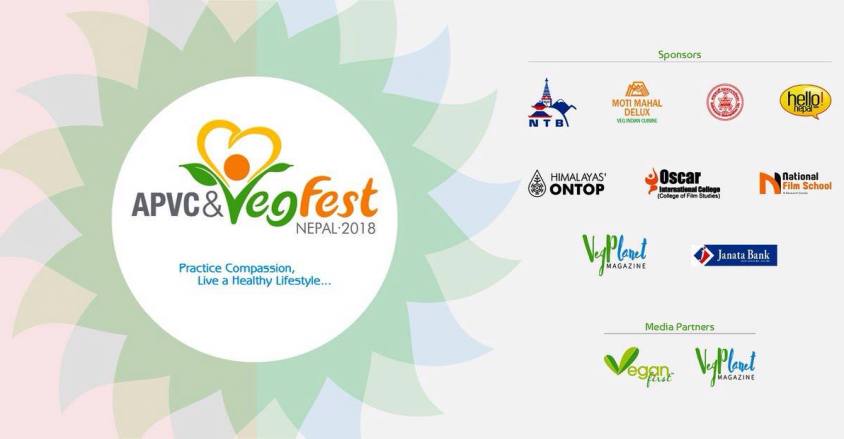 The 8th Asia-Pacific Vegetarian Congress was held in Kathmandu, Nepal

The 8th Asia-Pacific Vegetarian Congress was held in Kathmandu, Nepal on March 10th to 11th 2018. More than 35 international delegates flew in from China, Hong Kong, Singapore, Malaysia, Thailand, Indonesia, India and the United States, to attend the two-day Asia-Pacific VegFest, cultural performances, and to visit the vegan food stalls. During the Congress, representatives from various countries shared their opinions on health, environmental protection, animal protection, spiritual awakening, and business promotion.  Issues related to the development of vegetarianism around the world were also discussed. Thank are due for the strong support of the Government of Nepal. Newspapers nation-wide reported news of the Congress.

During the first day, there was a meeting of representatives of the Asia-Pacific Vegetarian Union, it was held in the National Meeting Hall, Kathmandu. In the meeting there was discussion about what the role of the Asia-Pacific Vegetarian Union would be in the coming years, and about the actual development plans for specific Asian countries. The plans received positive feedback and support from all in attendance.

A two-day Asia-Pacific Vegetarian Congress and Vegetarian Festival (APVC and VegFest) kicked off Saturday in the federal capital.   Minister for Women, Children and Social Welfare, Tham Maya Thapa inaugurated the festival at Nepal Police Club. She insisted on the need of adopting a vegetarian lifestyle, which according to her, helped people to live a peaceful life, by promoting the culture of non-violence. The adoption of a vegetarian lifestyle would help to remove the psychology of violence from the human society.

"Animal violence is also the cause of human violence," said the Minister, who has been practicing a vegetarian lifestyle for the past 20 years. She urged the promotion of a vegetarian culture in the country.

The Conference was organized by the Nepal Vegetarian Association (NVA) and the Asia-Pacific Vegetarian Union (APVU), the Minister also promised to give future support to the NVA. The Asia Pacific Vegetarian Congress and Vegetarian Festival sponsored by Nepal Tourism Board,  Muktishree Pvt. Ltd., Moti Mahal  Deluxe Veg Resturant, Vegplanet Magazine  , Janata Bank, Prbhu Life Insurance  etc. Also speaking on the occasion, Minister for Population and Environment, Lalbabu Pandit. He said he had his solidarity with the vegetarian campaign.Dr. P. Vythilingam from Malaysia and Dr. Satyawira Aryawan from Indonesia both shared with us updates on lifestyle related diseases, in the view of medical practitioners

US businessman and Vegan campaigner Philip Nicozisis, while presenting a working paper on the occasion, stated that a vegan lifestyle was the sole way to live a healthy life with compassion. "Vegan foods are helpful to overcome cancer-like diseases," he claimed, stating that Hippocrates, who is considered as the father of medicine, believed that foods act as medicines. “The time had come to change the world,” he added.

Mr Yang Feng, from China, has reported to the conference that the Chinese government has supported the vegan movement. He added that there are more than 1000 free vegan restaurants in China, and a variety of vegan businesses are coming to the market. One project in the South East region of China is the building up a vegan-friendly city. Ms. Chan Li Zhi, from Guangzhou Guangbay Group, shared with us news about Chinese import and export procedures, and the market potential of vegan food in China. She discussed the development of e-commerce and logistic for support vegan businesses.  Shara Ng from Hong Kong Vegan Association explained the ongoing work of APVU in collaborating with various vegan associations in China.Vegan climber, Kuntal Joisher, from India who has already successfully scaled the world highest peak, Mt Everest, said he had never any problem with being a vegan (vegans are those who follow a vegetarian diet that excludes eggs, milk products, and animal-derived ingredients as well). Meat and milks products are not compulsory for achieving sound health and for strength.Giving the reference of Patrick Baboumian, 33, of Germany who holds the title of world's strongest man, Mr Joisher said such a powerful man survives just on vegetables, fruits, and food grains.

The VegFest showcased multiple stalls exhibiting a variety of vegetarian and vegan foods. Nutritionists and vegetarian/vegan campaigners from different countries were also taking part in the event. This was the first time that such an event had been organized in Nepal The next Regional Congress will be in Hong Kong, where the 9th APV Congress will take place during 2019.  The Congress will be supported by delegates from many countries. The Hong Kong delegates promised to hold a special Oriental Cruise. Hong Kong is a cosmopolitan city in which sustainable and healthy lifestyles are enthusiastically practiced & promoted.